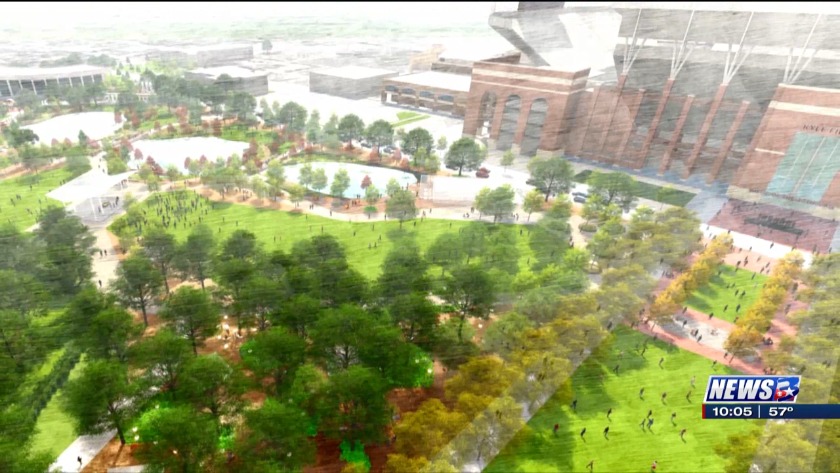 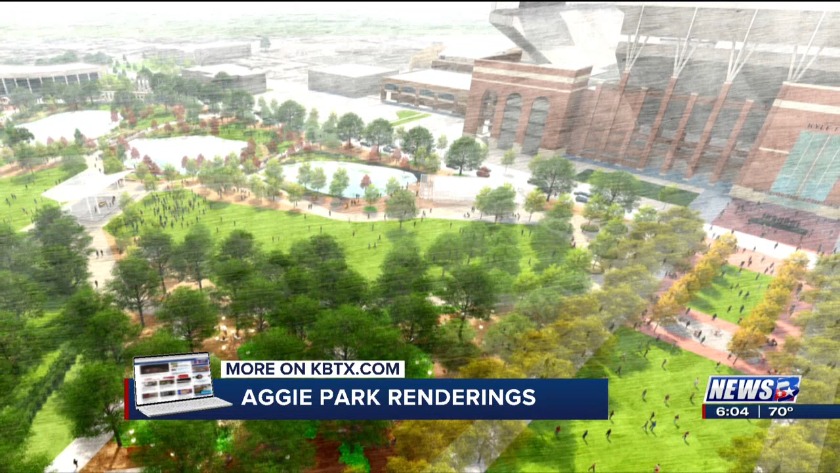 The new Aggie Park will be located between the Clayton W. Williams Jr. Alumni Center and the John J Koldus Building. The project will create student study and relaxation spaces as well as tailgating and entertainment spaces for students, faculty, staff, former students and visitors.

Including water features, an outdoor amphitheater and tributes honoring Distinguished Alumni and former university leaders, Aggie Park was adjusted from the original plan of a lake or water feature by Kyle Field. A second phase of the project will create a new facility to host Aggie Ring Day and other special events.

"It looks like a great park, very attractive to new students, I mean maybe even like a place to go fishing on the lake, a few concerts even, a first date in the park, who knows?," said Tony Chuo, a student at Texas A&M University.

"I think it's just great. The scenery I'm looking at from there is really amazing. I love A&M and to see it grow is just a great opportunity," said Texas A&M student, George Crump.

Michael K. Young, President of Texas A&M stated, “We are excited about this project. From beautiful places to study and relax to an outdoor amphitheater for events, Aggie Park will be enjoyed by generations to come. We are grateful to The Association of Former Students and the Texas A&M Foundation for their commitment to raise private funds to make it happen.”

The project will cost an estimated $25 million and begin with the removal of One Circle Drive, the former President’s home and the event space. Elements of the house will be preserved for future use.

"It's a strike to A&M tradition maybe but I mean out with the old, in with the new. We'll see," said Chuo.

John Sharp ’72, Chancellor of the Texas A&M University System, offered: “Aggie Park will be a grand statement that says ‘Welcome Back’ to former students and ‘Howdy’ to campus visitors while becoming a favorite green space for students. I look forward to seeing it when it is complete.”

The project has an anticipated completion of Spring 2022.