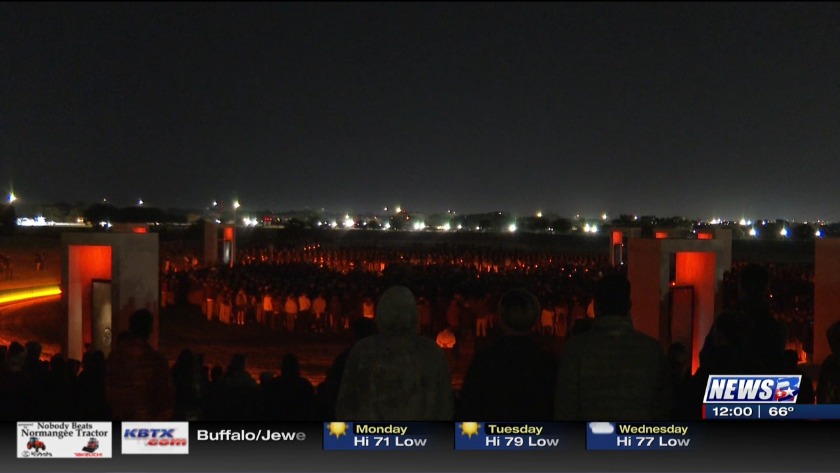 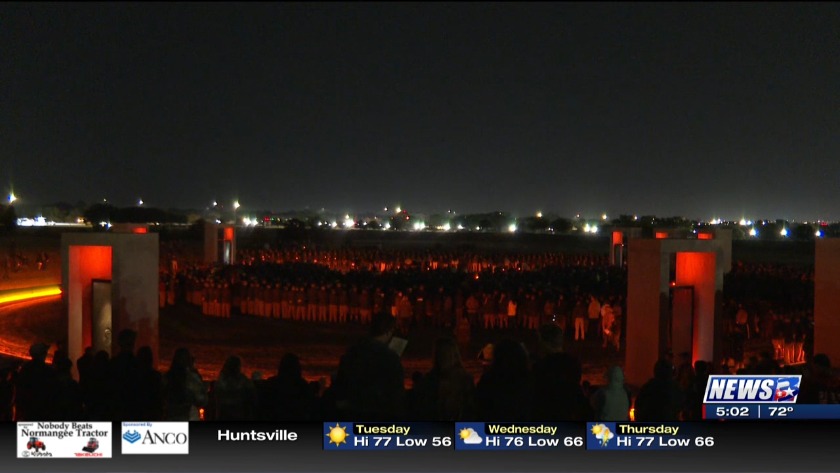 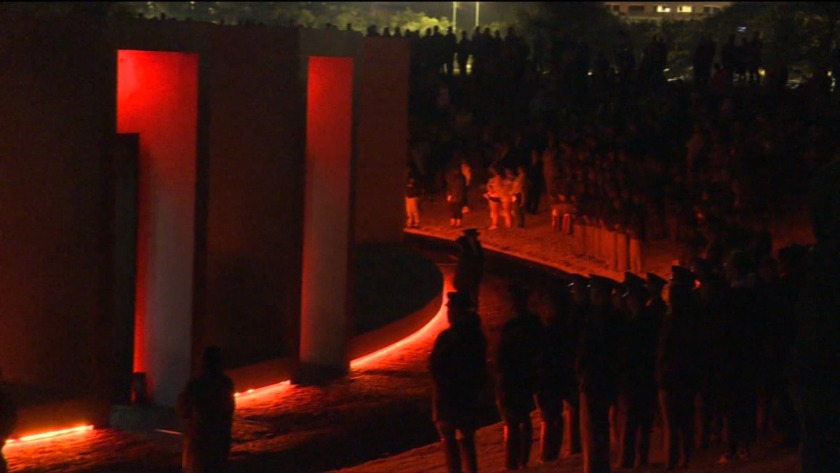 Hundreds attended the small ceremony at the Bonfire Memorial on the campus of Texas A&M. At 2:42 a.m. on November 18, 1999, stack collapsed killing 12 people and injuring 27 others.

Monday's ceremony marked the 20th anniversary of the collapse. The names of the 12 victims were called out and the crowd answered "Here." The crowd sang the "Aggie War Hymn" and "Amazing Grace."

Several family members of those killed in the collapse attended the ceremony.

Johnathan Harrington, a junior at Texas A&M, held the candle for one of the fallen Aggies, Jeremy Frampton. Harrington is in the same company in the Corps of Cadets that Frampton was in.

"Jeremy Richard Frampton was in Spider D, D-1, as am I," said Harrington. "Bonfire holds a special place in my heart, so it was a huge honor to be able to stand here and light his candle and remember him tonight."

Harrington said Texas A&M is a special place with traditions that connect Aggies around the world.

"The overwhelming support of the Aggie Network is head and shoulders above anything else there is," said Harrington. "There are really no words to describe it, other than it is an amazing thing."

Harrington has attended every Bonfire Memorial during his time as a student, but other students showed up to their first remembrance on Monday. One of those students was senior Amelia Cook. Cook transferred to Texas A&M, but said it feels like home.

"60,000 people go to this school," said Cook. "Just knowing that if you ever need a hand, an Aggie is there to help you is important."

Cook said when she read the excerpts on the memorial's portals, she became emotional.

"It's hard because they're fellow Aggies. They were our age. They were in the Corps," said Cook. "They just loved this school, so with that in common, you just feel such a deep connection with who they are."

Texas A&M student David Greek was another attendee on Monday, and he said the wound would never be completely healed.

"The shock of their death doesn't really fade," said Greek. "I imagine that this will keep going on for decades and decades more."

The Bonfire Memorial was silent leading up to 2:42 a.m., until students, former students, and visitors sang "The Spirit of Aggieland."

"Having all the Aggies around me singing 'The Spirit of Aggieland' together and being able to say 'here' for the fallen was very emotional," said Texas A&M senior Jabyn Clear.

Clear said even though the bonfire collapse happened 20 years ago, she feels like she can still relate to its victims.

"They're just like us, you know, freshman, sophomore, juniors, seniors," said Clear. "You know, whatever classification and whatever major, it's just crazy to think about it. That was someone's friend, someone's daughter or son."

A majority of the freshmen at Texas A&M were not born when stack collapsed in 1999. Freshman Tate Jones was one of many who attended their first memorial Monday morning.

"We're all just small parts of such a great and huge program that reaches all across the world," said Jones. "It's just so amazing to be down there with a bunch of other Aggies loving and supporting each other."

After asking Jones why he thinks it is vital to continue to honor the 12 Aggies, he had one answer.

Former student David Swanson worked on the bonfire when he was in school, then was involved as webmaster in the 1990s. He showed up Monday's memorial wearing a pot from 1999. Swanson attended the memorial in part because he wondered how the 12 Aggies were going to be remembered so long after the stack collapse.

"I had been part of the bonfire, but I also knew how significant it was 20 years ago, and I was just wondering to what extent that was going to be remembered by another generation 20 years later," said Swanson. "I was really pleased to see the thousands out tonight."

Aggies honor the legacy of Bonfire at Memorial

Aggies honor the legacy of Bonfire at Memorial