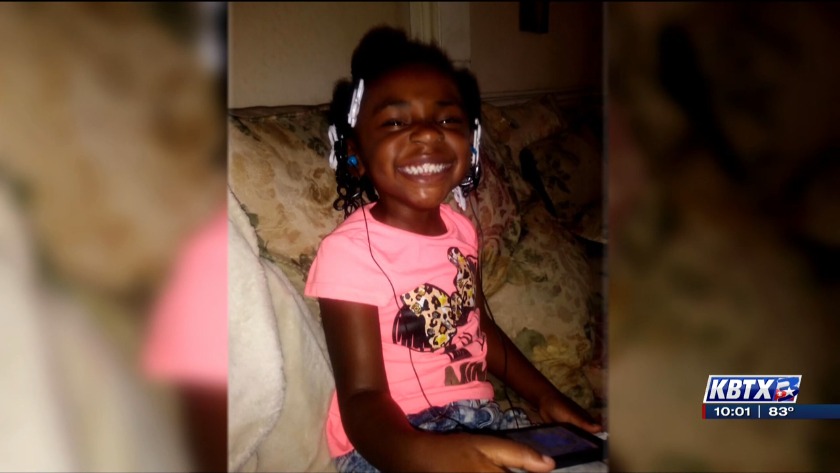 BRYAN, Texas (KBTX) Bryan police say human remains that appear to have been a child were discovered Friday night behind a home on Conner Street during their search for a missing 3-year-old girl.

Bryan Police Chief Eric Buske said during a news conference on Saturday that investigators are now handling this as a murder investigation, and they are working alongside the Brazos County District Attorney's Office.

Click on the video player to watch Saturday's news conference.

"At this time we are not naming any suspects, however we believe the suspect had to be someone close to Rayven," said Chief Buske.

Officers said it could be some time before they can positively identify the decomposed remains, but family members are saying there's little doubt it's the body of Rayven Shields. Police say based on the remains, they think Rayven was likely last seen in the middle of June, rather than July 27, as previously suggested.

Police searched the home on Conner Street near SH 21 in Bryan several times this week. A K9 from the Search Dog Network first alerted police Friday to the possibility of the remains in a garden behind the home. Following the detection, officers obtained a search warrant Friday evening and began digging in the area for the remains.

"This is a very tragic outcome and not what we hoped for. The officers who worked this are heartbroken and so is our community," said Chief Buske.

Police confirmed Shields and her mother, Virginia Adams, lived at the house with a relative.

Shields was announced as a missing person after Child Protective Services obtained a court order this week for Adams to release custody of the child, but police say Adams has been uncooperative and refused to say where she was located. Only Adams has been arrested in relation to the case at this point, on charges of interfering with child custody.

As police continue their investigation, this is a timeline of what we know so far:
Friday, July 27
According to the National Center For Missing & Exploited Children, July 27 is the last time anyone publicly saw Rayven Shields. The child’s mother was being investigated by Child Protective Services when the mother, Virginia Adams, fled with the child.

Monday, July 30
Bryan residents told KBTX police were going door to door late Monday night asking about a "missing 3-year-old." When KBTX asked about the search early Tuesday, Bryan police were only able to confirm that they were assisting CPS with an ongoing investigation. No further updates are provided to media until Wednesday.

Tuesday, July 31
Authorities locate Virginia Adams, 35, but Rayven is not with her. Police say Adams gave conflicting stories about the location of the child.

Wednesday, August 1
Bryan police issue a missing child alert to the public and asks anyone with information to contact investigators. Police said a court order was recently obtained by CPS giving them custody of Rayven.

Adams is arrested and charged with Interference with Child Custody. Bond is set at $75,000.

Click here to see the video published by NCMEC.

7:30 p.m. Bryan police execute a search warrant at a home on Conner Street near SH 21 after a K9 from Search Dog Network detected possible human remains in a garden in the backyard.

10:47 p.m. Police say the residence belongs to a family member. A police spokeswoman says Adams and Shields were living at the home.

11:15 p.m. Detectives and investigators are seen digging in the backyard of the home.

9:00 a.m. The homeowner, Aninas Martin, Jr., is seen removing personal belongings and his dog from the house. Martin tells KBTX that police confirmed a body was discovered.

9:15 a.m. The missing child's sister, Stephanie Hedge, tell News 3's Rusty Surette that members of the family have been confirming on social media that a body was discovered overnight, and Virginia Adam's boyfriend is now in custody.

10:33 a.m. Bryan police confirm human remains have been found at the home on Conner Street. A noon news conference is scheduled at the Bryan Police Department.

12:00 p.m. Bryan police confirm that human remains that appear to be a child were discovered in the backyard of the home on Conner Street and are now working to positively ID the victim. Police are now working this as a murder investigation along with the Brazos County District Attorney's Office.

Bryan Police Chief Eric Buske’s prepared remarks from Saturday’s press conference:
On Monday, July 30th, at 5:15 p.m., Bryan Police Department received a request from Child Protective Services to assist in locating 3 year old Rayven Shields, who was supposed to be living with her mother Virginia Adams. Child Protective Services was attempting to check on Rayven’s well being. Her mother was not cooperative and told inconsistent stories about where Rayven was. At that time, Adams still had legal custody of Rayven. The Bryan Police spent the entire day looking for Rayven, including searching her residence at 4037 E. State Highway 21.

On Tuesday, July 31st, Bryan Police Detectives continued to search for Rayven and Virginia continued to provide different stories concerning Rayven’s whereabouts or refused to say where she was. Also on Tuesday, Child Protective Services obtained a Court order to remove Rayven from Adams custody.

On Wednesday, Child Protective Services served the court order on Ms. Adams. Adams still refused to cooperate with the search to locate Rayven. Bryan PD arrested Adams for Interfering with Child Custody. Detectives continued search for Rayven, following every possible lead. At that time we also entered Rayven into the Center for Missing and Exploited Kids, which is a national organization which acts to assist agencies working on missing or endangered children.

On Thursday, detectives continued the search for Rayven and continued to interview family and friends and Virginia Adams. No additional information was found.

On Friday August 3rd, we continued the search for Rayven throughout the day. On Friday, a cadaver dog from Search Dog Network was brought to the Hwy 21 address. It alerted that there were possible remains. At about 7:30 p.m.we served a search warrant 4037 SH 21. This search focused on the garden area, based on the fact that the cadaver dogs had indicated over the garden. We conducted a meticulous excavation of the garden.

The Bryan Police Department is working closely with the District Attorney’s Office as this is now an active murder investigation. At this time we are not naming any suspects, however we believe the suspect had to be someone that was close to her. There is no indication that the community is in any danger.

This is a very tragic outcome and not what we had hoped for. Our officers working this case are heartbroken as is our entire community.

How well do you know Mardi Gras trivia?

How well do you know Mardi Gras trivia?