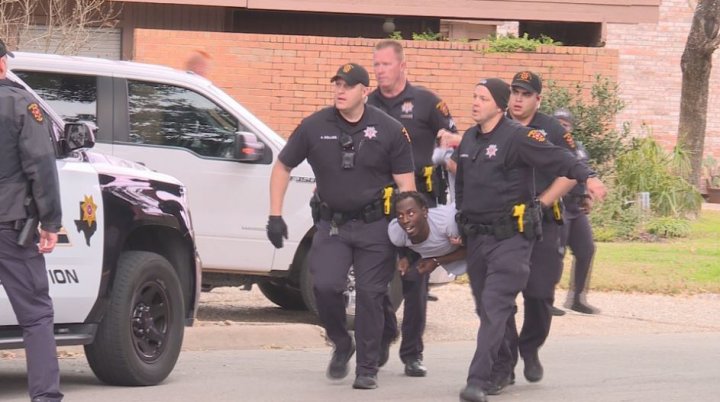 COLLEGE STATION, Tex. (KBTX)- A wanted man is now in custody and facing multiple charges after College Station police say he damaged a patrol car and assaulted a police officer during his arrest.

College Station police said they had to use leg restraints on a wanted man who damaged a police vehicle and assaulted a police officer.

Police tell KBTX they responded to an apartment complex in the 400 block of Anderson Street on Saturday morning in an attempt to locate Keith Cornell Pullin, 23, of College Station.

Pullin had a warrant for his arrest from another state.

Police say they first met with Pullin's girlfriend who closed the door on the officers initially but came out later and said Pullin was not in the apartment.

She then allowed officers to search the apartment and Pullin was located hiding in the air conditioning return space.

It was determined his girlfriend had assisted him in hiding in the space, even securing the grate back over the space. She did this knowing that he was wanted for a felony, said police.

The College Station Fire Department was called to the scene to help free him from the space.

Pullin was placed in handcuffs and into the back of a patrol vehicle. He was soon able to remove his seatbelt, moved his hands to in front of his body, and began kicking the steel-framed plexiglass window so hard that it was heavily damaged and bent.

When the patrol officer tried to get the Pullin under control, police say he attacked the officer, punching, kicking, and tackling him, before running away.

The officer was injured but gave chase and was able to get Pullin back into custody after a short time. He continued to resist being transported even after leg restraints were placed on him by multiple officers.

The injured officer received treatment at the scene for a large abrasion.

Pullin was arrested for an outstanding warrant from Illinois for Manufacture or Delivery of a Controlled Substance.