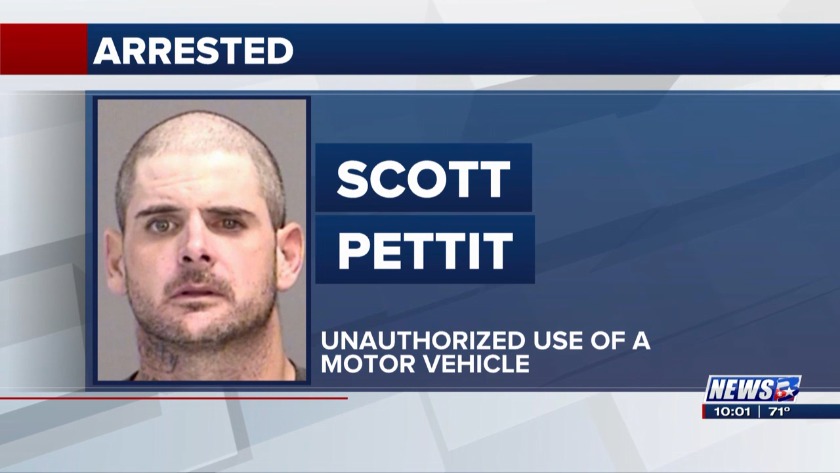 COLLEGE STATION, Tex. (KBTX)- College Station police have arrested a man accused of stealing a pickup truck and then fleeing the scene of a crash with another vehicle.

Scott Anthony Pettit, 33, of Gause was found hiding Wednesday evening hiding out near Brison Park before he was taken into custody.

A spokesman for the police department said Pettit is being charged with unauthorized use of a motor vehicle and additional charges are likely.

After he was taken into custody on West Dexter Drive, police took him to a hospital for treatment due to his level of intoxication on something other than alcohol.

Police say Pettit stole a pickup truck around 5:15 p.m. from Oney Hervey Drive, crashed into another vehicle near Holleman Drive and Eleanor Street, and was followed by the hit-and-run victim to the area of Brison Park where he abandoned the vehicle.

Pettit has been arrested 21 times in Brazos County since 2009, according to online jail records.

MANHUNT HAPPENING NOW at Brison Park in College Station. @CSTXPolice are looking for a stolen vehicle suspect. Report anything suspicious in that area to 911.

⚠️Officers are searching for a car theft suspect in the area of Brison Park: Dark skin w/m or h/m late 30s to early 40s, military style haircut, left arm is a tattoo sleeve. Military green shirt. No known weapons. Please use caution in the area and report suspicious person to 911 pic.twitter.com/WlBpODIZ0y


Suspect stole a vehicle at about 5:15 p.m. from Oney Hervey Drive, crashed into another vehicle near Holleman Drive and Eleanor Street, and was followed by the hit-and-run victim to the area of Brison Park where he abandoned the stolen vehicle and fled on foot.

Please avoid the police perimeter area near Brison Park (Brison is south of George Bush & Dexter) while officers search for the suspect. Monitor @CSTXPolice for updates.