BRYAN, Tex (KBTX) - The newest update from the US Drought Monitor is far from good news, but it comes with a silver lining. 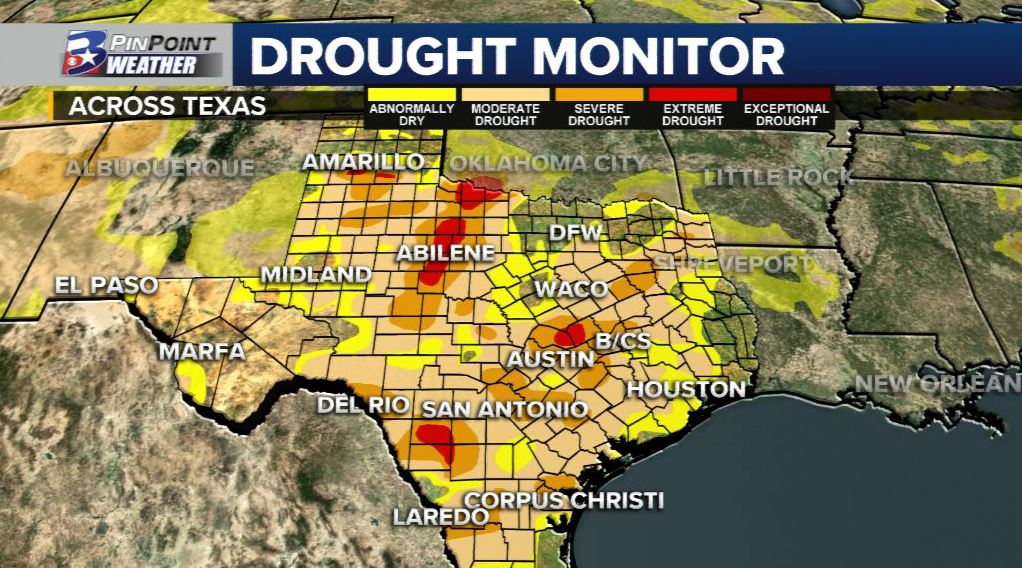 The bad: For the first time in over a year, we see the "Extreme Drought" category return to portions of the area. Milam County along and west of Highway 36 is classified in that category, while the rest of us generally along and west of that same corridor in the Brazos Valley are in or nearing "Severe Drought". Save a small area including southern Grimes, Montgomery and San Jacinto counties, most of the Brazos Valley is at least in "Moderate Drought".

The good: Data for the Drought Monitor is collected every Tuesday morning from the week before, and does not include the much needed rainfall we've seen across the area over the past several afternoons. It's a bit hard to predict, but at the very least, we should not see a worsening of drought conditions across our area come this time next week.

More relief ahead? Definitely possible. High pressure will put a lid on showers and storms in the short term (through the weekend) but more seabreeze showers and storms will be possible starting next week, and a potential cold front could provide some needed soakings before next weekend. That, of course, is still far from certain. Stay tuned!

Important: data for this week's #Drought Monitor was collected 7am Tuesday. Since then, parts of the Brazos Valley have picked up some needed rain

More near 100° is in the works this weekend. Recent wet weather has been very selective. Small, if any, improvements because of it pic.twitter.com/DsJglIRbgk