Has Bryan / College Station ever experienced a White Christmas?

By Shel Winkley
This article was first posted to KBTX.com on December 24th, 2016. (and for those wondering, there is a 0% snow chance for Christmas 2019 in the Brazos Valley)

A White Christmas is defined as having at least one inch of snow on the ground on the morning of December 25th. Snow is usually uncommon for the Brazos Valley, but what about on Christmas morning?

On the map below, you can see NOAA’s calculation of the historical odds of at least one inch of snow on the ground on Christmas Day across the continental U.S., using their 1981 to 2010 U.S. climate normals.

For the Brazos Valley, climate data is not on our side to wake up to a snow on the ground Christmas morning. That trend will continue this year -- while sharply colder, the forecast calls for sunny skies and highs in the upper 40s / low 50s.

Bryan / College Station weather records go back as far as 1882. In the 134 years of records, snow has never been recorded at the official weather station on December 25th. But what about prior to that?

To be fair, there are a few years missing early on in our 134 year stretch. The history of College Station weather records goes as so:

According to the National Weather Service, "Weather records show that snow has never fallen at the official observation sites in Houston or College Station on December 25th. Snow has fallen the week before and the week after the holiday but never on the 25th."

Below is an illustration -- sent to KBTX by a Weather Watcher -- depicting a White Christmas on the Texas A&M campus (then the Agricultural and Mechanical College of Texas) in 1876, the very first Christmas the college was open.

To back up the chance that there actually was a White Christmas in 1876, an article ran in the Austin American-Statesman on December 28th, 1876 stating "The ice and frozen ground, the sharp winds of Sunday and Monday and the 'snow, the beautiful snow of Tuesday...'"(Credit:

Snippet of the December 28, 1876 Austin American-Statesman (Click to Enlarge) Still not convinced? The name Carson may sound familiar to you in the City of Bryan. As one of the first families to settle in this area -- at Old Union Hill, around where J. Cody's BBQ Restaurant now stands -- Christmas 1876 was well documented. An excerpt from "the Texas Sesquicentennial Edition" notes sleet and blizzard conditions Christmas Eve in Brazos County, followed by a celebration on a White Christmas Day in 1876. Documents show that the "countryside was blanketed with six inches of snow on the 20th followed by near zero weather..."

Excerpt from "the Texas Sesquicentennial Edition" (Click to Enlarge) 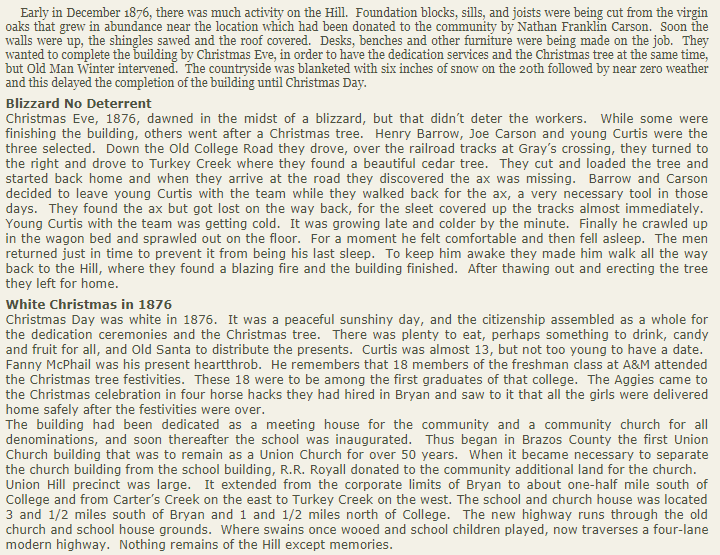 The complete article can be found here

So was there snow on the ground Christmas Day 1876? There is no "official" concrete proof. But one could say from looking at an illustration of campus, writings from a historic family's past, and an article written 106 miles west, 3 days later -- it sure looks like it was a White Christmas after all!

College Station’s Christmas in the Park filled with holiday spirit