BRYAN, Tex. (KBTX) - It is official. March 2020 was the warmest on record in Bryan-College Station's history.

That was not the case for the majority of the month.

24 out of 31 days this month reached afternoon highs considered to be above-average. In fact, many of those significantly above average, in the low-to-mid-80s. 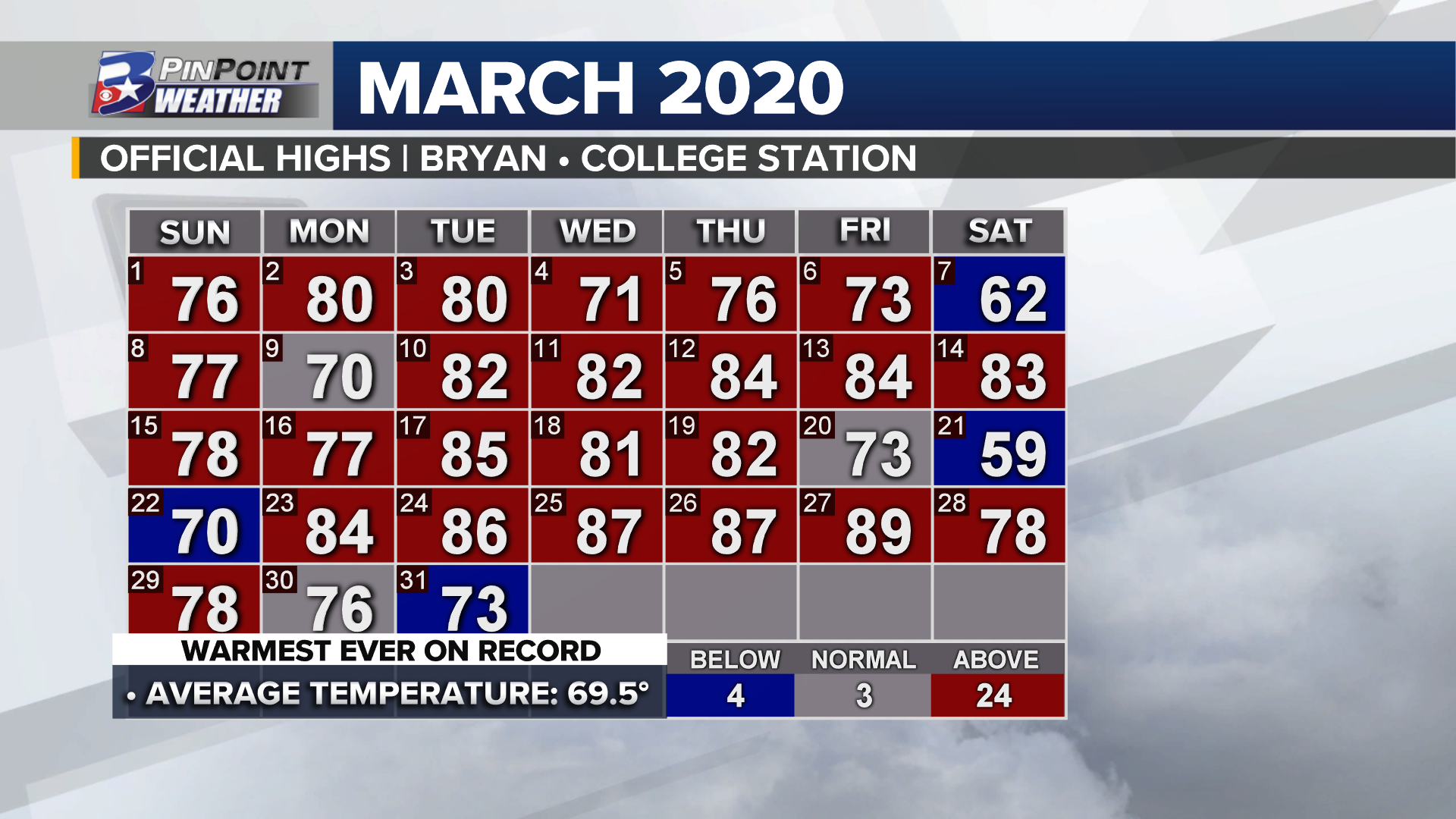 The warmest afternoon high was recorded on the 27th, when Easterwood Airport officially reported 89°.

To go along with those warm afternoons, morning temperatures began days in the 60s more than the 40s and 50s -- which are more typical for this time of the year.

As the month closed, the official average temperature -- all morning lows and afternoon highs considered -- for March 2020 rings in at 69.5°.

The previous top spot for the warmest March on record: 68.5° from 1921. This month's record heat smashed the previous record by 1°.

Most years are withing a tenth of a degree or two from the next in the list. Not 2020.

For perspective, the 30-year average temperature for March in Bryan-College Station is 61.4°. March 2020 checked in 8.1° above the expected average.

Observations began on the campus of Texas A & M College in May 1882. The station was relocated to the Texas Agricultural Experiment Station main farm located seven miles southwest of the College Station Post Office in January 1954. This station closed April 30, 1958. Other rainfall and temperature observations were taken in Bryan at 2310 23rd Street from September 1, 1913 through March 31, 1947.

A weather station was established at the College Station FAA Airport (originally referred to as Bryan CAA Airport) in August 1951. The FAA Airport Station is now known as Easterwood Field.

The 30 year climatological averages are from the College Station FAA Airport (Easterwood Field) but the extremes and other temperature and rainfall records are from all sources.

Looking Back: 400 pictures that tell a tale of hail, wind, and fiery sunsets

Another, less widespread round of storms possible Thursday

Looking Back: 400 pictures that tell a tale of hail, wind, and fiery sunsets

Another, less widespread round of storms possible Thursday