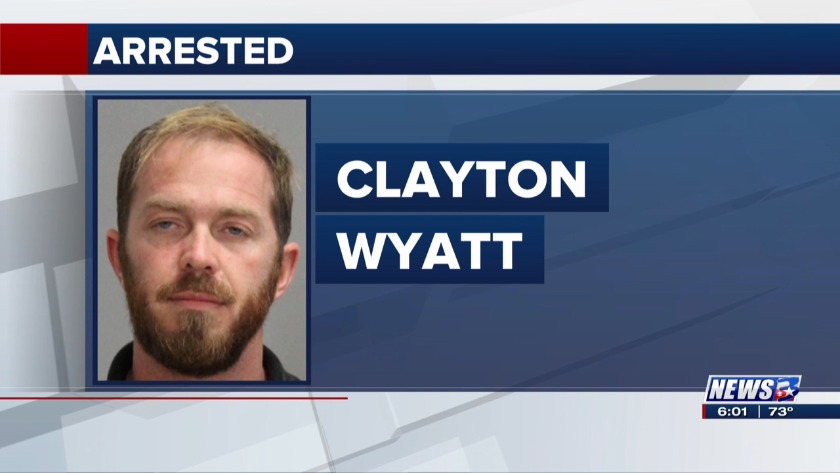 Clayton Wyatt, 33, of Bryan was arrested on his second DWI charge after hitting a parked SUV with his pickup truck outside a home on Brompton Lane.

The owner of the SUV told KBTX he had to chase down Wyatt after he tried to leave the scene. Police arrived and then took him into custody after being found at another nearby house.

It happened around 11:00 p.m. in the Copperfield neighborhood in east Bryan on Brompton Lane.

Neighbors tell KBTX it appeared the driver of a pickup truck took a corner in the subdivision too fast, lost control of the vehicle, and slammed into an SUV that was parked in the driveway of a home.

The force of the impact was enough to flip the SUV onto its side.
The owners of the vehicle say they were asleep inside their home when it happened and when they went outside they saw the driver of the truck trying to leave the area.

The pickup truck broke down only a few yards away from the home where the crash happened, but witnesses said that's when the driver abandoned the truck and tried to run away.

According to an arrest report, Bryan police said that Wyatt told them he drank two “normal-sized Budweisers” and nothing else. Police said he refused to take a breathalyzer test.

Wyatt was later transported to CHI St, Joseph’s Hospital, where police obtained a warrant to take a blood sample.

Wyatt was later transported to the Brazos County Jail and was charged with his second driving while intoxicated and cited for failure to control speed.

Nobody was seriously injured in the accident.