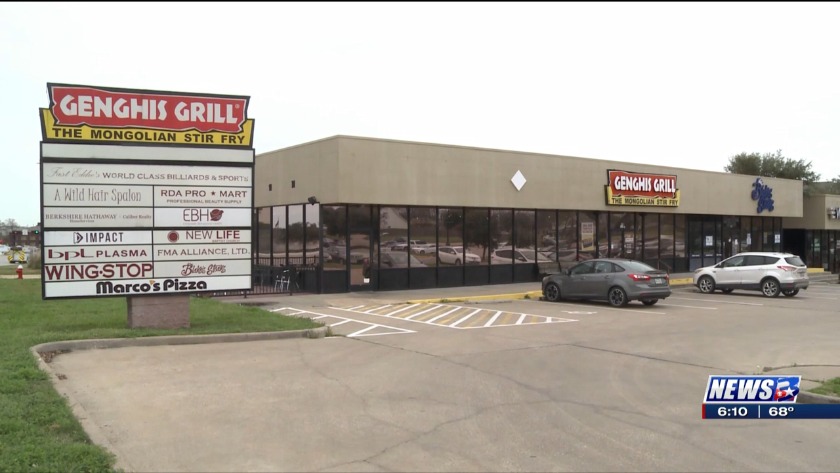 If you like to eat at Genghis Grill you only have a few days left to grab a meal there. The Mongolian restaurant is closing down Sunday. The manager told KBTX high rent and utilities were some of the factors that led the owner to close.

The pizza place just expanded a few doors down and are disappointed to see their neighbor close.

"I had Genghis Grill for the first time the other day, loved it and then found out the next day that they were closing so it's sad," said
Natasha Felder, Marco's Pizza Manager and College Station resident.

Genghis Grill has around 30 employees. Management tells us the staff will receive bonuses for staying on and they are looking at allowing team members to transfer to other locations out of town.

Also closing in College Station is Aéropostale. They will close on Wednesday at their Post Oak Mall location. A manager inside said their rent was going up and foot traffic was down.

"You're always sad to see a business shut down and you particularly wonder is it something that the city could have done or somebody else could have done. What are the reasons behind it,?" said Mayor Karl Mooney of College Station.

"The fact of the matter is that those of us who’ve lived in College Station long enough. We know that businesses come and go and sometimes it’s just the tastes and desires of the marketplace changes as well," said Mayor Mooney.

Mooney said the change is part of the city's evolution and many businesses are finding success or looking to open here.

"Well, you know as quickly as someone says our utilities are higher in College Station than they might be elsewhere. Well, our property taxes are lower so it's a trade-off," Mooney said.

Other restaurants to recently close include Urban Bricks Pizza on Texas Avenue and Spoon's Yogurt across the street. The owner at Spoon's said their other locations in Bryan and south College Station have done well, but the Texas Avenue location wasn't performing where they needed it to be.

"I grew up here and it's always been like that everything comes and goes," said Felder. "There are so many things that come in at one time and then they kind of, the older stuff gets pushed to the side. It’s sad to see it though."

Pier One and Motherhood Maternity are other businesses soon slated to close.

Still, many other new businesses are slated to open in College Station including Walk-On's, Dunkin' Donuts, Five Guys, Another Broken Egg and Snooze A.M. Eatery.