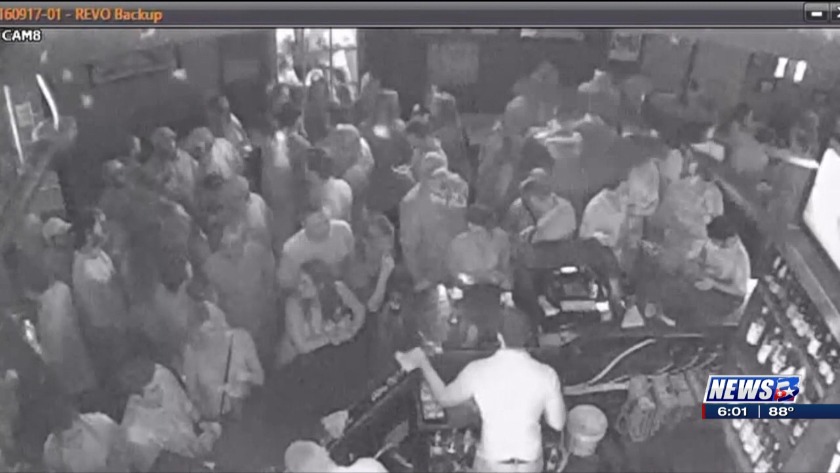 COLLEGE STATION, Tex. (KBTX) - The Texas Alcoholic Beverage Commission is changing how they do underage drinking investigations after one of their agents, Jonathan Jergins, was accused of perjury.

Surveillance video from September 2016 showed Jergins undercover with a minor at Rebel Draft House on Northgate. They were there for a sting to see if minors would be served alcohol.

Video shows the agent handing a drink to the girl. But, the bartender was arrested and then put on trial accused of serving her the drink.

"We are very disappointed in that result. This seemed like a closed and shut case of aggravated perjury," said Craig Greening, the attorney for a local bartender and made a case of perjury against the TABC Agent.

Last year, his client was acquitted in less than 30 minutes for a charge of selling alcohol to a minor during that 2016 sting.

"She said 'yes, that's my father' and at that point he says, 'Well I can serve your father the beer'. And he poured the beer put it off to the side and waited and watched him until he took the beer. He took the beer off the counter and gave it to the minor," said Greening.

The TABC conceded that this case showed there were flaws in the way they were doing their work.

"The sting did take place two years before the eventual court case, so there was a good deal of time there. Again, what it showed us is that we need to take have our agents take more careful steps as it relates to recording information," said Chris Porter, Public Information Officer with TABC.

Porter said they found no wrongdoing with their agent and he wasn't reprimanded.

"He doesn't have any previous examples of any kind of disciplinary action," he said. "Our investigation found that more than likely it was simply mis-remembering of what actually took place," he said.

"This is going to be a learning opportunity for TABC. Obviously we have realized as a result of all this that there are some areas that we can improve as it relates to our underage compliance operations," said Porter.

"So what we’re doing is we're giving all of our agents across the state more than 250 of them additional training on how best to report information as it relates to these underage compliance operations and with the goal being to make sure that we have accurate reports," he said.

Greening says his client is moving on and they plan to get his record cleared.

"He also lost his job at the Rebel Draft House and had to put his career on hold for a while, while he waited for a jury trial. You know he wants to be a firefighter. Now he’s been able to pursue that now that he’s been found not guilty of this charge," said Greening.

Greening said they are still pursuing a federal civil rights lawsuit against the TABC.

Brazos County Attorney Rod Anderson's office tried the misdemeanor case of the bartender. He told us Wednesday he doesn't believe the agent intended to lie.

District Attorney Jarvis Parsons said the grand jury reviewed the facts. A perjury charge requires that a defendant make a false material statement under oath during an official proceeding, with knowledge of the statement’s meaning, and with intent to deceive.

A Brazos County Grand Jury has ruled that there are inadequate grounds for prosecution in the case of TABC Agent Jonathan Jergins, who was accused by a local defense attorney of perjury after he provided incorrect information while testifying at trial in November 2018.

During that trial, Jergins gave an account of a TABC underage compliance operation conducted at Rebel Draft House in September 2016. Jergins’ account was later contradicted by security camera footage shown at the trial by defense attorneys, resulting in a “not guilty” verdict for a bar employee accused of selling alcohol to a minor. Jergins’ conduct during the trial was later the subject of an investigation by the Brazos County District Attorney and forwarded to the grand jury, which issued a no bill ruling following a review of the case.

“As a law enforcement agency, the Texas Alcoholic Beverage Commission sets high standards of professional conduct for its peace officers. Any allegations of wrongdoing by one of our agents is taken extremely seriously. That is why TABC began an internal review of Agent Jergins’ actions during the undercover operation, as well as his behavior at trial. Our review found no wrongdoing on the part of Agent Jergins, and I’m pleased that the grand jury declined to issue an indictment following a careful review of the evidence.

We agree that this case has revealed some flaws in how underage compliance operations are conducted. As public servants, we have a responsibility to identify our shortcomings and to do better. As soon as TABC leadership was made aware of this case, we began a formal review of the underage compliance operation that took place in September 2016 and looked across the board for areas where improvement is needed.

Since then, we’ve instituted changes to the way underage compliance operations are conducted in order to ensure accurate information is recorded by participating agents immediately after each inspection. We’ll continue to look for other ways to improve in the coming weeks.

TABC views this as a learning opportunity. Texans have a right to expect the very best from their law enforcement agents, and the lessons learned from this case will go toward improving our agents and our processes for years to come.”