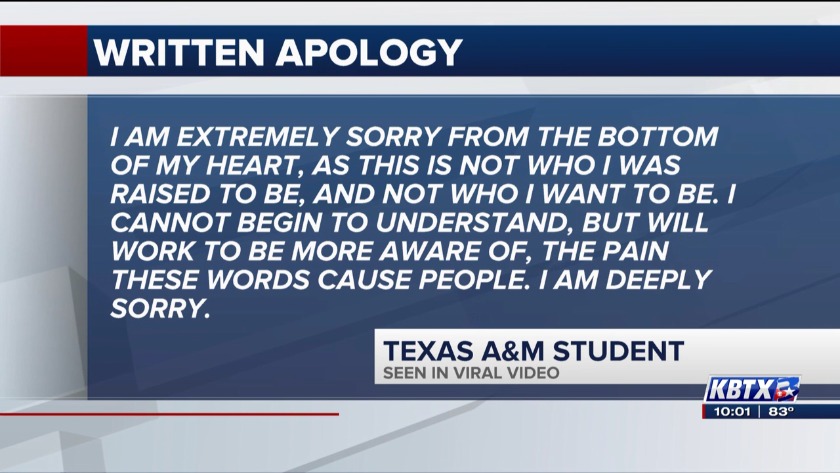 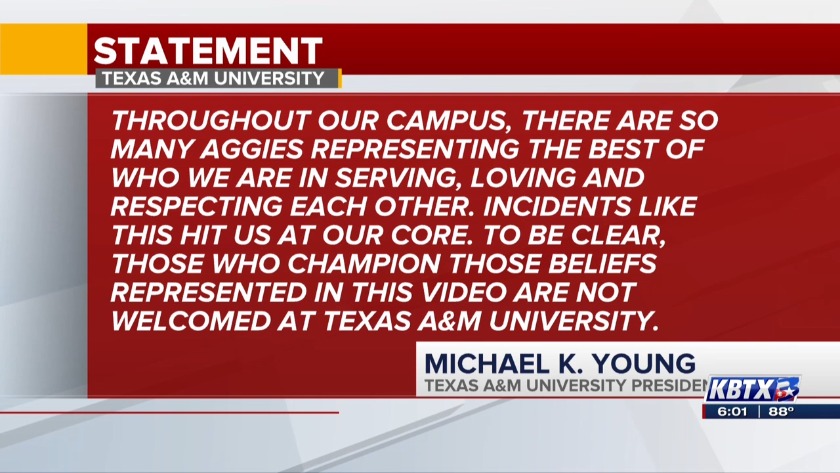 "A video of myself that I am extremely ashamed of was released over the weekend. My state of mind while the video was made last week in no way excuses my words or actions. In hindsight, I realize what I said and did was wrong and very hurtful to many," said the student. "I also realize that I have to do work within myself. I am extremely sorry from the bottom of my heart, as this is not who I was raised to be, and not who I want to be. I cannot begin to understand but will work to be more aware of, the pain these words cause people. I am deeply sorry."

It's unclear where and when the video was taken, but it was shared on a Snapchat account and then posted on Twitter on Friday, June 28.

In the video, several variations of the n-word are scribbled on blackboards as a white student holding an empty beer bottle uses offensive language to describe children of mixed races.

The 37-second clip has now been widely shared on several social media platforms.

Texas A&M President Michael K. Young says "those found responsible will be held accountable" in a response to the recording.

"This behavior is abhorrent and against the core values that we share and to which we aspire in all we do, including those of respect, excellence, and integrity," said President Young.

"This incident will be investigated through the Student Conduct office. While outcomes are protected by the Family Educational Rights and Privacy Act and cannot be made public by the University, those found responsible will be held accountable," he said.

A petition posted Monday on Change.org has already received more than 700 signatures asking that one of the students in the video be reprimanded.

"He and others around him need to understand the blatant racism and hatred they displayed," said Morgan Gimblet, the creator of the petition.