Imelda continues to ride along or near the I-45 corridor with the center over Harris County ahead of sunrise Wednesday. A very heavy rain band has been riding along the coast through a solid portion of the overnight, where the greatest flooding risk is early Wednesday.

A slight turn to the northeast is expected from the NHC track today, and each inching eastward could play a role in how much, or how little, rain we receive across the Brazos Valley today.

Rounds of rain and a couple storms are still expected, especially along and east of Highway 6, though the morning will start quiet enough for most that are north of a Conroe to Navasota to Brenham line.Daytime heating will make activity a bit more widespread by the afternoon.

Not much change in the latest update from the National Hurricane Center regarding Imelda.

This is still a tropical depression with very localized wind of 35mph tucked near the center of circulation. While this area of low pressure has wobbled and stalled a bit tonight, the motion is still to the north around 6mph.

Latest forecast track takes the center of circulation up the I-45 corridor slowly through the day Wednesday. That center is expected to be right around North Lake Conroe to New Waverly by daybreak and near Huntsville by midday. Highest rainfall chances and totals are still expected near and east of that center.

The Weather Prediction Center is monitoring Montgomery and San Jacinto Counties for the possibility of localized flooding by daybreak Wednesday. As the center of this low slinks north, it could push heavier bands of rain into the southeastern corner of the area. Drivers will need to mointor roads on the way to work and school from Lake Livingston to Conroe. More on that concern can be found here.

This was the last forecast and advisory that will be issued by the National Hurricane Center. Regardless, a heavy rain concern will continue over the next 24 to 48 hours. Rainfall totals between 6 and 12 inches of rain, with localized 18 to 20 inch totals will be possible across parts of the Upper Texas Coast, including through Houston and Galveston.

As of the hour, Imelda has officially been downgraded to a tropical depression. Winds occasionally have been noted up to 35mph near the center of this system. It is currently located just south of Downtown Houston, moving north at 7mph.

Even though Imelda has "weakened" the concerns remain the same through the overnight hours to Wednesday and Thursday. Heavy tropical rain will cause localized flooding through parts of Southeast Texas to the Upper Texas Coast.

The Brazos Valley's outlook remains unchanged at this time. With most of the area falling west of the center of circulation, rainfall totals may not amount to more than 1/2" to 1" over the next 48 hours, especially west of the Navasota River. Those between the Navasota River and I-45 could find 1" to 3" of rain in gauges by the end of Thursday. The greatest concerns comes for those east of I-45 where localized 6" to 10" totals are not ruled out -- although a bigger potential for that may fall just outside of the area in far East Texas.

Next full update, including an updated forecast cone, arrives by 10pm from the National Hurricane Center.

Tuesday Afternoon Update: Imelda continues to move north at 7mph inland southwest of Houston. Heaviest rain bands will likely remain south of I-10 overnight, giving some areas in excess of 5" while we likely have scattered light rain with an isolated heavier downpour through the early morning.

The biggest change to note with our newest update is the cone of uncertainty shifting to the east, which could focus a larger portion of the heaviest rain associated with Imelda off to the east.

Heaviest rain for the Brazos Valley will likely still occur Wednesday and Thursday. Areas along and east of Highway 6, but especially along and east of I-45, carry the highest chance for rain and potential flooding. We'll continue to watch the track of this storm as another jog to the east could greatly lessen the rainfall forecast for our western counties especially.

After going with tropical depression 11 just after midday, The National Hurricane Center has decided to upgrade the system in the Gulf of Mexico to Tropical Storm Imelda with the 1pm CDT update.

The NHC has found enough organization to now name the low we have been tracking since before this past weekend. Over the course of the afternoon, Imelda is forecast to make landfall and move northward through the rest of the week tracking the center along the I-45 corridor.

Impacts: Largely, impacts for the Brazos Valley (and our subsequent forecast) remain the similar.

Two biggest notes: Concentrated areas may receive more rain, especially along I-45, than previously forecast. Totals upwards of 6" are likely in isolated spots, with the potential for more. We'll also likely see a bit more breezy conditions through the end of the week, but that shouldn't do more than be a concern for loose lawn furniture. 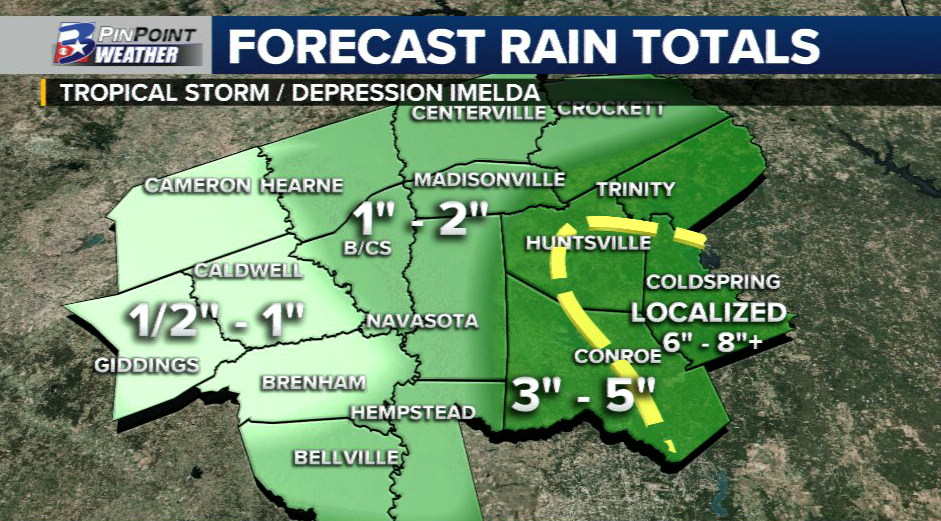 This will primarily be a rainfall event for at least part of Southeast Texas. Heaviest totals are still expected along the coast and deep East Texas, though we'll need to watch for areas of flooding in the Brazos Valley as early as Wednesday.

Tuesday will still bring scattered tropical downpours and an isolated storm, with more organized activity expected as early as Wednesday morning, but especially by Wednesday afternoon through early Friday. 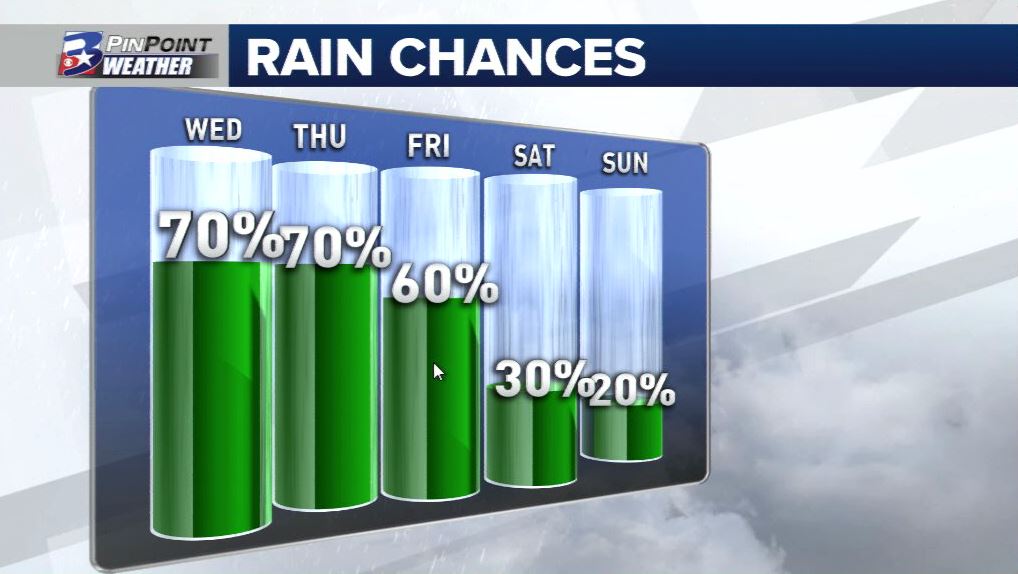 The system will slowly move north through the end of the week, with enough moisture leftover for scattered drain and a couple storms this weekend, but the deeper moisture will move out of the area with this system by the weekend.