What to know about Friday's winter-like blast

Shel Winkley What a difference a day makes!

At 5am, B/CS chimed in at 79 degrees. Temps quickly fell into the mid 50s later in the morning after a front pushed through the area, bringing some much needed rain.

We'll work our way to about 60 (at the warmest) this afternoon as the north wind stays healthy, about 15-20mph. Bundle up and enjoy! We're still on track for a beautiful, but chilly at times, weekend. 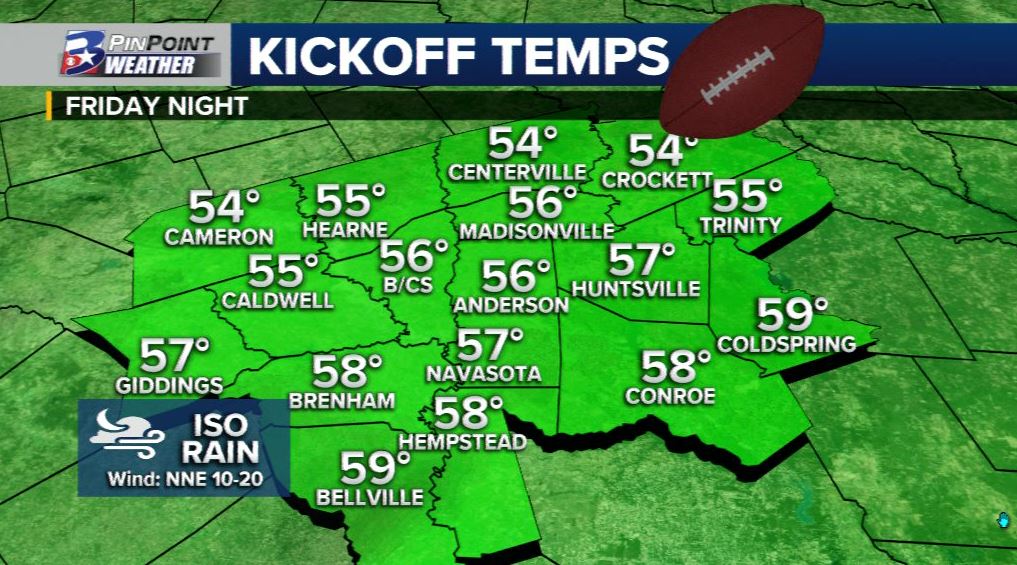 In fact, Bryan - College Station officially touched 96° for an afternoon high, which is the second hottest temperature ever recorded on October 10th.

Do yourself a favor, DO NOT walk outside in shorts and a t-shirt Friday morning.

The second cold front of the season is an unusually strong one for this time of October. Temperatures are expected to tumble 10° to 15° in just 30 to 45 minutes after the cold front passes and a brisk north wind takes over. Brazos Valley thermometers fall from the mid and upper 70s to the low-to-mid 50s between 4am and 9am Friday morning, then spend the day stuck there.

Factor in a strong north wind at 15 to 20mph, gusting at times to 30mph, and wind chills -- what you are dressing for -- is the mid-to-upper 40s at best. A WIND ADVISORY is in effect from 7am to 7pm Friday.

Leading in that cold air is a chance for rain and thunderstorms to rattle across the Brazos Valley, for some during the morning commute. While storms are not expected to be severe, thunder, lighting, small hail, and gusty wind could accompany some of the stronger activity moving north to south across the area before 9am. Scattered showers could drift through at times after the colder air takes over, making for a soggy, blustery, colder end to the workweek.

More details and a complete timeline of what to expect with Friday's cold front is included in the video above.

CliffsNotes version of what to expect in #bcstx: pic.twitter.com/xH8pOaNiFz

First comes rain
Then comes wind
Then comes the cold, wind, and (at times) rain all together.

Not totally perfect but gives you an idea of what a much colder Friday looks like in the Brazos Valley#bcstx pic.twitter.com/0oU8g40wyT

Tropical Depression Three forms in the southern Gulf of Mexico

May by the numbers in the Brazos Valley

Splash of rain for some as the calendar flips to June

Tropical Depression Three forms in the southern Gulf of Mexico

May by the numbers in the Brazos Valley

Splash of rain for some as the calendar flips to June