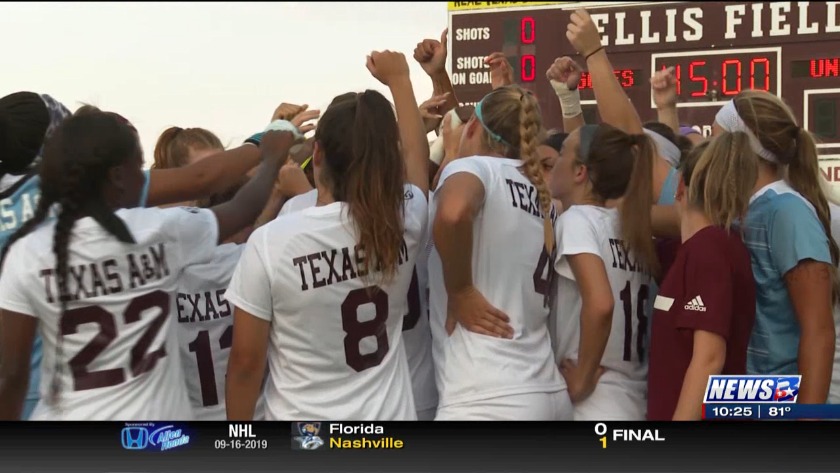 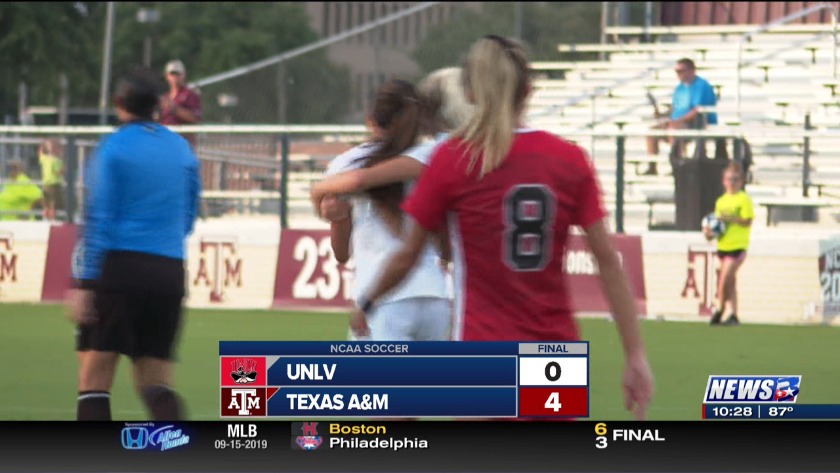 COLLEGE STATION, Texas – The No. 12 Texas A&M Aggies bounced back from their first loss of the season with an impressive 4-0 victory over the UNLV Rebels Sunday evening at Ellis Field.

Ally Watt compiled five points off two goals and an assist as she moved on into the ninth slot on the Aggies all-time goals list with 37. Watt scored her second ice-breaker of the season and her 11th in the last two seasons.

The Maroon & White outshot the Rebels 26-7 and owned a 7-3 edge in corner kicks. Texas A&M (5-1-2) was in line to cause more damage, but the Rebels’ goalkeeper Elly Reynada made 10 saves.

Shantel Hutton and Olivia Ausmus each played 45 minutes in goal as the Aggies recorded their sixth shutout of the season. Ausmus made her first appearance as an Aggie, registering three saves in the second half.

12’ – Tera Ziemer passed it to Jimena Lopez who sent the cross to Ally Watt who beat the keeper to the ball at the 6-yard box for the goal. A&M 1, UNLV 0.

22’ – Tera Ziemer sent the ball of the left side of the goal post and rolling in from 20 yards out off an assist from Katie Smith. A&M 2, UNLV 0.

61’ – With a defender and the goalkeeper sprawled on the turf, Watt dished the ball to Ásdís Halldórsdóttir at the PK spot and the Icelandic native knocked it between two defenders into an empty net. A&M 4, UNLV 0.

The Aggies head to Starkville to commence conference play against the Mississippi State Bulldogs Thursday at 7 pm.

“It was great to be home. I thought that tonight our forwards really came through on the things that we have talked about in the time since the BYU game. They were getting them back into their lanes and being able to open up more spaces for other people. The fact that we had goals coming from midfielders, goals from the forwards and a variety of goals tonight was a good indicator of what’s ahead.”

On the importance of scoring early in the game…

“It takes the pressure off of not scoring in the last couple of games, so that was the biggest thing, I think. It’s just a reminder of who we are, and how we can play. I thought their goalkeeper had some spectacular saves. She had 10 saves on the night. That’s fantastic.”

On where he thinks this buts him going into SEC play…

“I feel like tonight is a better indicator of who we are, considering we were able to bounce back from a poor result where we got outplayed on the road. Even being outplayed on the road, we gave up two goals in three minutes. If it wasn’t for those, then who knows. Our fight was so good, and our defense was so good on the night in Provo, that now we build off four goals and a lot of chances tonight. So I feel good about where we are going into Mississippi State. It is going to be a tough challenge because they are very, very athletic. They are hard to beat in Stark Vegas. It’ll be a derby type of match just because it’s an SEC game against teams that know each other well.”

On her first career goal…

“It was an amazing feeling, something I have been wishing and working a long time for. For it to finally happen and the way that it did was amazing.”

On her two goals…

“I know that I’ve been struggling a lot this past year and the coaches and team have been helping me find myself again. Gaining those little goals off the small things I have been working hard on is going to help me gain my confidence back. I think as a whole, the team’s confidence has been increasing. There were good goals all around tonight and for Tera {Ziemer} and Ásdís {Halldórsdóttir} to get their first goals of the season was big.” 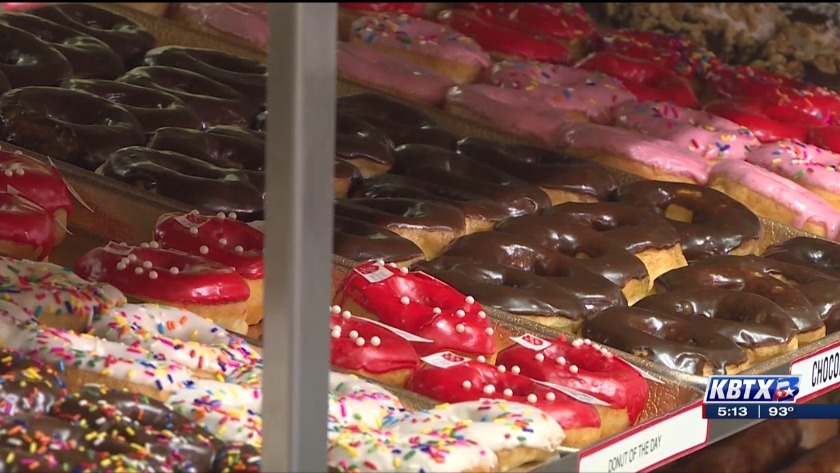 Video: Celebrate National Donut Day and give back to the community

Video: Celebrate National Donut Day and give back to the community