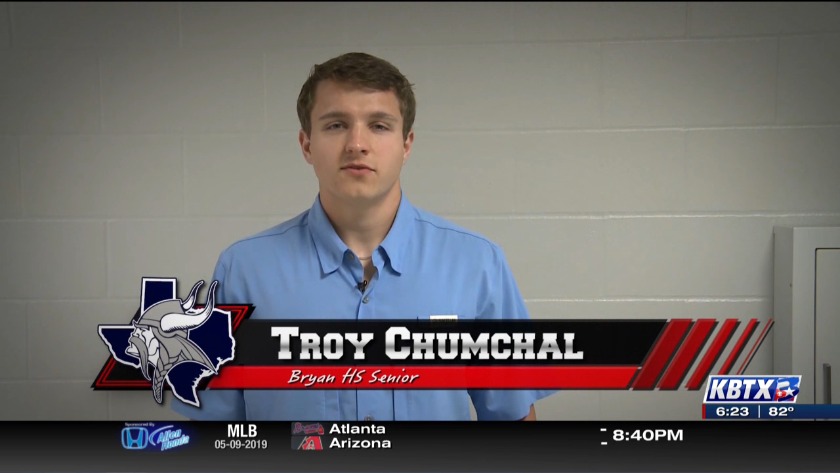 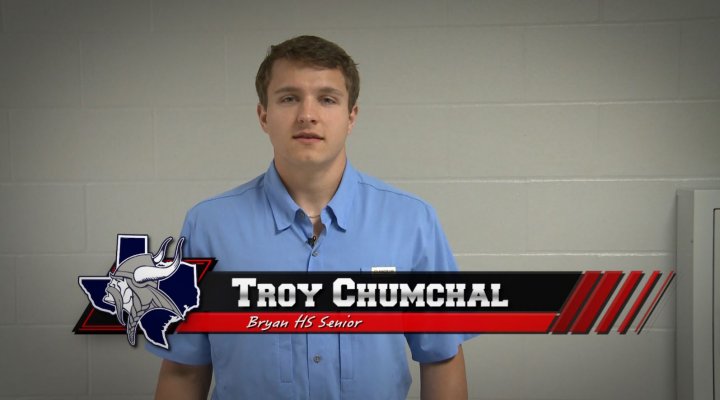 News 3 Sports would like to congratulate our latest Classroom Champion, Troy Chumchal. The Bryan High School Senior has a 4.8 GPA, and is currently ranked in the top 3 percent of his class.

“Troy's an example leader. He's always engaged in the lesson without bringing light to him but he sits up front everyday, it's open seats, and he's there to learn every single day and then he's able to help his classmates, and his classmates know that he explains very well. So, he's a valued teammate for them.”-Mike McCarley, Teacher.

Troy was a starting Offensive Lineman for the Bryan Vikings. For his efforts in football, Troy was a 1st Team Academic All-State selection and he was the 14 6-A, Academic Player of the Year. Outside of sports, Troy is a member of the National Honor Society, and he volunteers at his church and in his community. In his spare time, Troy enjoys hunting and fishing, working on cars, and spending time with his family.

“I think there's no question about it that Troy realizes that if he puts together everything he can athletically, and at the school academically, that he's going to further himself as much as he possibly can in life and I look for him to become a very big success. He excels at everything he does. When he does something he wants you to know, or he wants to show he's done his very best every time he does something.”- Robert Jesurun, Coach.

“One way I handle the pressure of being a student athlete is just reminding myself everyday that I shouldn't feel the pressure, because I just have to do my best. As long as I do my best that's all I can ask for. As a senior this year on the football team I had to be a leader multiple times. In one instance I actually injured myself by tearing my ACL at the end of the year and I really had to speak up and be more of a vocal leader to the team; try to help them as much as I could even though I wasn't on the field at the time.” says Chumchal.

After high school, Troy will attend Texas A&M University and will major in Electrical Engineering. And Troy hopes to one day work for a major motor company after college.