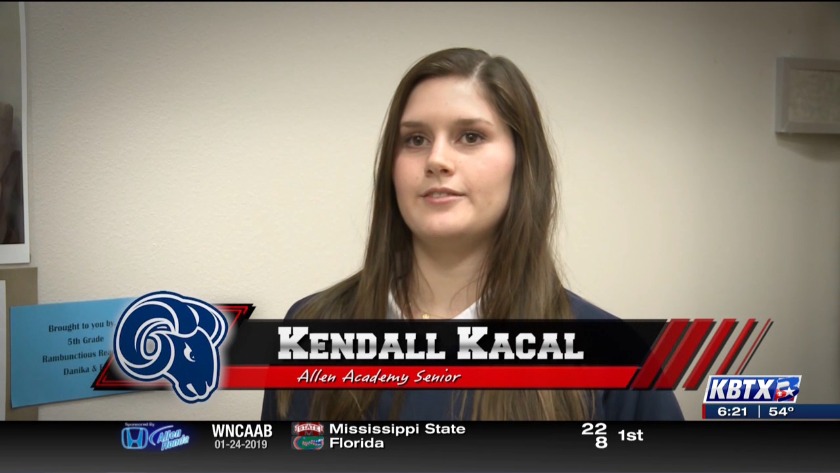 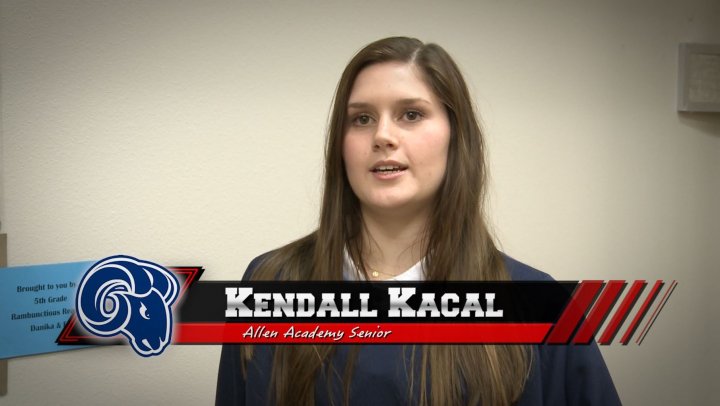 News 3 Sports would like to congratulate our latest Classroom Champion, Kendall Kacal. The Allen Academy Senior has a 4.3 GPA, and is currently ranked as one of the top students in her class.

“Well I think there's a lot of personal motivation. She is wired to be successful, to push herself
to be her best. I also think her faith is a big part of her life in this respect as well. Like, I think that she knows that she was given gifts and abilities and she chooses to live intentionally to like honor that as well.” Morgan Pesek, Teacher.

Kendall is a member of the cheerleading squad, the golf and soccer teams at Allen Academy. She was also the Volleyball Team Captain the past two seasons for the Lady Rams. In 2015 and in 2016, Kendall was a State Champion in Volleyball and in then in Golf. She was also named All-Brycal and the All-Academic Brazos Valley team for her efforts on the court and in the classroom. Outside of sports, Kendall is involved with the National Honor Society, Symphony Belles, the United Way, and she's the President of the Student Council.

“Between the two types of leaders I would say she's more lead by example. She can be loud if she wants to be, but that's not her style. It's more work ethic, determination...Here's what I'm going to do...You see that particularly in volleyball and then when she was able to play soccer...You know it's by example. It's a great example for the younger kids, it's an example for her other classmates as well.” Matt Rush, Coach.

“I'm motivated because of my parents. Everything they've given me in life has given me the opportunity to do all these things. I do a lot of extracurricular but time management is a skill that I've had to develop and by doing all these things, that has gotten better and that's how I've been able to handle all of the pressure from everything and the teachers at Allen are really accepting and understanding of what I go through.” says Kacal.