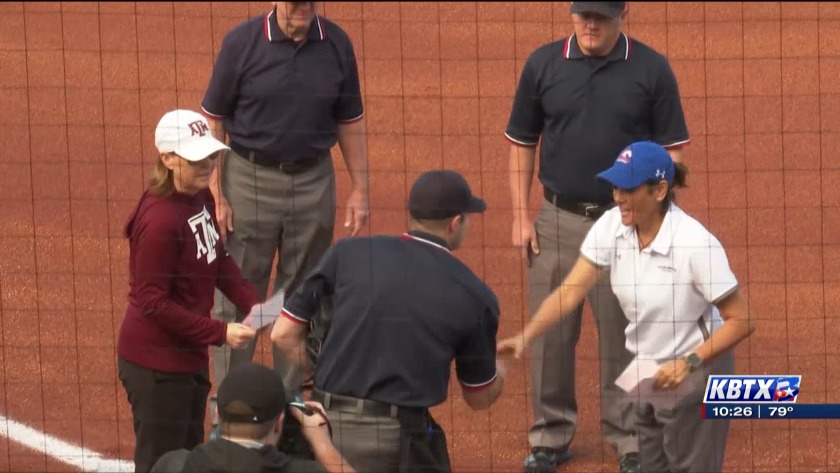 BRYAN (KBTX) - Texas A&M Softball has a pair of "Super Seniors" returning for the 2021 season, Kelbi Fortenberry and Kelly Martinez.

After the spring sports season got cut short due to COVID-19, The NCAA ruled that those athletes would be granted an extra year of eligibility. Two seniors for the Aggies, Fortenberry and Martinez, officially announced on Saturday they're coming back to Aggieland for one more run.

Fortenberry and Martinez helped lead the Aggies to a 17-9 record this year right as conference play was starting. Fortenberry started all 26 games and ended the shortened season with an eight-game hit streak.
Martinez was coming off an arm injury heading into this past season, so now she has the opportunity to return at 100%.

Both Fortenberry and Martinez say it's important for them to come back and take care of unfinished business next year.

"This 2020 team had a chance to get us back to the College World Series. I 100% believe that the 2021 team is going to be the exact same and maybe even more because we have such talented players coming in. We have talented players coming back. This team is incredibly stacked," reflected Fortenberry. "With all the information and knowledge we absorb from Coach Snyder, you could tell by our numbers based on the little amount of season we had, that we were on a track to getting back to the Women's College World Series. I was really excited about that," Fortenberry added.

"I think we're going to build off of last year. Just the one series we had and the few preseason games. I think we can build off of it because we're not losing very many pieces, and we're bringing in what I've heard is really good players," Martinez exclaimed. "I think next year we're going to be able come out even better than we did this year and keep going and working our way up," added Martinez.

Several other seniors announced they will not be returning for an extra year on the Aggie softball team.

A&M Head Coach Jo Evans says the dynamic of having seniors return to the team for another year will be different from what it's ever been. Both Fortenberry and Martinez said while they're excited to be back, they're prepared to take a back seat and help next year's senior class be leaders.

"It's kind of a rare opportunity for the girls that were supposed to be seniors. They have two of last year's seniors there with them, so if they need to bounce an idea off of them because we're going to be more of the silent leaders," Martinez said. "We've been there, we've done that, now let us help you. They'll still be the senior leaders. They can still lead the team how they want to lead it, and if they need help, they have us to fall back on," added Martinez.

"Obviously since I already kind of had my senior year, I'm going to let the juniors now seniors have their senior year. I'm going to kind of sit back in the more vocal leader role and just lead by example. I'll just be there when the seniors need advice or something because being a senior is stressful, whether people know that or not, because you have a lot of things you do for the program that nobody sees," explained Fortenberry. "I'm just excited to sit back and help, but more lead by example and still be a vocal leader when it comes to being on the field," added Fortenberry.

Aggieland, I’m coming back for another year. Let’s go win a natty ���� pic.twitter.com/UwnWIOreRn