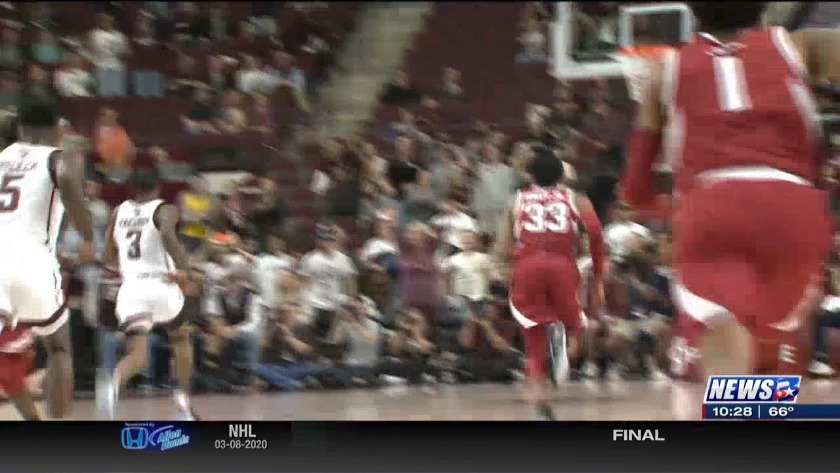 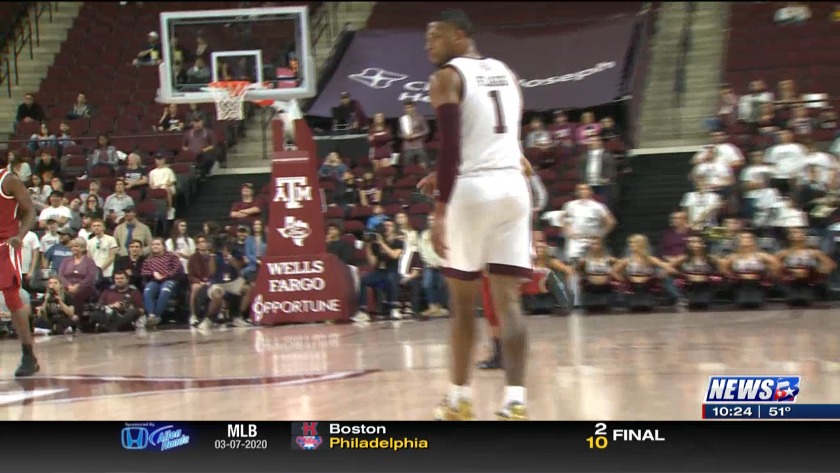 "We closed out our careers at home the right way," Nebo said. "It was a happy moment for both of us."

The Aggies (16-14, 10-8 Southeastern) trailed 28-21 with a little more than three minutes remaining until halftime before outscoring the Razorbacks 12-2 headed to the locker room. A&M's scoring flurry was capped by Nebo's offensive rebound and dunk as time expired in the first half.

"We haven't been very good the last four minutes at the end of first halves," Arkansas first-year coach Eric Musselman said. "Tonight was another one of those nights."

Emanuel Miller made four free throws and Mitchell made two layups in that span in shoving the Aggies to a surprising halftime lead.

"An amazing boost," Mitchell said of the Aggies' outburst to close the first half. "That was the most energy I've ever seen from my teammates."

The Aggies outscored the Razorbacks 44-39 in the second half, despite Mason Jones scoring 30 points for Arkansas (19-12, 7-11). Jones recorded his ninth 30-plus point game of the season, and Isaiah Joe added 22 points for the Razorbacks. The duo combined to make 14 3-pointers.

"We've kept figuring out ways to win," Nebo said of A&M closing out the regular season by winning five of seven games.

RECORDS & SERIES NOTES
Texas A&M defeated Arkansas, 77-69, Saturday at Reed Arena to conclude the regular season with a 16-14 record.
Texas A&M finished with a 10-8 record in the SEC, marking the best record in SEC conference play since the Aggies went 13-5 and were named SEC Co-Champions in the 2015-16 season.

TEAM NOTES
After being down 28-21 with 3:37 left in the first half, the Aggies went on a 12-2 run to give the Maroon & White a 33-30 advantage into half.
In the first half, Texas A&M outscored Arkansas, 16-4, in the paint. For the game, Texas A&M outscored Arkansas, 32-10.
In the second half, the Aggies shot 59.1% (13-of-22), the second highest field goal percentage in a half this season.
The Aggies shot 47.2% (25-of-53) from the floor, marking their eighth consecutive game in which they have shot 40%-or-better.
The Maroon & White bench outscored Arkansas, 20-6.
Texas A&M used the starting lineup combination of Savion Flagg, Wendell Mitchell, Emanuel Miller, Mark French and Josh Nebo for the first time this season (1-0).

INDIVIDUAL NOTES
Wendell Mitchell led the Aggies in scoring and matched his career high of 25 points, last set in 2019 at Florida (1/22). Mitchell has reached double digits in six of his last seven games. The Rockdale, Texas, native also posted season highs in field goals made (8) and three pointers made (5).
Josh Nebo scored 20 points, marking his third game this season with at least 20 points. The Houston native matched his season high in field goals made with nine. Nebo also swiped a career-high three steals.
Emanuel Miller led the team in rebounds for the 11th time this season with 10.
Quenton Jackson put up 14 points, tallying his 13th game this season with 10-or-more points.
Buzz Williams is 16-14 in his first season at Texas A&M and 269-169 in his 13 seasons as a head coach.

UP NEXT
The Aggies take on Missouri in the first round of the SEC Tournament in Nashville, Tennessee. Tipoff is set for 6 p.m. and the game can be seen on SEC Network.

Texas A&M Quotes
Head Coach Buzz Williams
On what this A&M team has meant to him…
"The work of those guys. That has been the reward. 'Buzz, did you think you were going to win 10 [SEC] games?' No. It never crossed my mind. What crossed my mind was, we have a lot of work to do. What are we going to do tomorrow? Man, we've got some more work. What are we going to do next week? How can we make our work more efficient? So, what I've learned is, the work is the reward, not being recognized for the work… Maybe the time that I've given to these kids, if it's built on the right things and not on the results, the reward is in the work. The reward is in the impact that this work will have on these players' kids someday."

On Josh Nebo and Wendell Mitchell's Senior Day performance…
"Chuck [Wendell Mitchell] is the least polluted player I've ever coached. He has no pollution in his heart, no pollution comes out of his mouth, no pollution in his brain. This is his third school and he's had four different coaching staffs. Tonight, he had his 29th charge in 30 games, in a style of play defensively that was foreign to everyone. You can't argue with the god-given talent that [Josh] Nebo has. But, the transformation in his mentality is something that is very rare. He's on his third coaching staff, and I know he's always been gifted, but I don't know that he's been accountable for having to be relied upon in the manner that we have had to rely on him on both ends of the floor. He has grown and transformed relative to his accountability and understanding how important he is on both ends of the floor."

On Quenton Jackson's dunk…
"He is a sensational athlete. Having him back this game was a huge difference. He brings a lot of energy defensively and puts a lot of pressure on the defense offensively. He helps us keep the floor spread and keep everyone on."

Senior Forward John Nebo
On Senior Day and the performance they had tonight…
"It was a special night, especially Chuck [Mitchell] and I to close out our careers at home the right way. It was a happy moment for the both of us. Came out with a win at our last game at home."

On how the team has changed…
"I say we have just changed by buying into what the coaches want us to do, staying together as a unit. Nobody splits when we have struggled, we all just stay together and kept listening to the coaches and what they wanted us to do. The coaching staff never gave up on us, we just figured out ways to win."

Head Coach Eric Musselman
On Wendell Mitchell and A&M's Senior Day matchup…
"I thought Wendell [Mitchell] was awesome. We talked about drive stops and jump stops, because they are so good at taking charges. I thought that was a big part of the game. Their weak side helped, being in the lane, being there on dribble penetration. Wendell [Mitchell] has played really well as of late, and tonight was no different. I think we came into today leading the country in defending the three ball, but we have gotten worse and worse of late defending the three for whatever reason."